Cannabis retailers in Illinois border towns are seeing strong sales to customers from neighboring states but are spending time and money training their employees to warn people that it is unlawful to transport marijuana across state lines.

Illinois had a strong kickoff to its adult-use cannabis market, with recreational marijuana stores selling nearly $40 million worth of products during the first month of sales.

While adult-use marijuana shops in Illinois declined to report the exact percentage of customers who came from other states, they did describe the number as “many.” 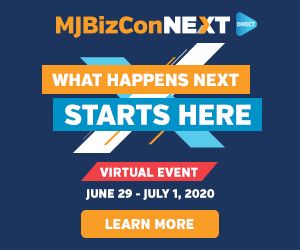 Out-of-state customers who are 21 years old and have a valid driver’s license can purchase cannabis in Illinois, which offers expanded sales opportunities to marijuana shops that are near the state’s borders in particular. But it is illegal to cross state lines with cannabis.

Marijuana retailers near the Illinois border are taking the time to train employees so they can let customers know the law, whether it’s through conversations, posting signs, or providing information on their counters.

“We value our customers and encourage them to follow the law,” said Kathleen Olivastro, regional director of Illinois Supply and Provisions’ parent company Ascend Wellness Holdings, a Waltham, Massachusetts-based, vertically integrated operator with assets in Illinois, Massachusetts, Michigan, and Ohio.

“Ultimately, individuals are responsible for any legal ramifications, including transporting across state lines, once products leave the (store).

“We do encourage anyone considering purchasing cannabis to research and understand the laws before they come in.” 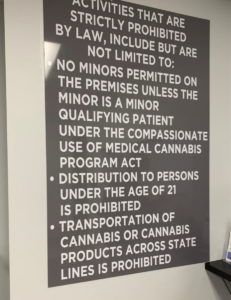 A sign at Illinois Supply and Provisions warns customers about crossing state lines with marijuana. The shop is located in Collinsville, Illinois, which is about 15 miles from St. Louis’ Gateway Arch.

Illinois Supply and Provisions, located about 15 miles from St. Louis’ Gateway Arch in Collinsville, Illinois, has served customers not only from Missouri but also from Florida, Indiana, Iowa, Kentucky, and Wisconsin.

Stores located near the border have the opportunity for stronger sales but must ensure that their employees have more extensive training than staffers in stores that are not near state lines.

Nic Easley, CEO of Denver-based 3C Consulting, said he advises retail clients to create a questionnaire for customers to answer when they’re checking out that includes an item about agreeing not to take cannabis across state lines.

He’s also counseled clients not to sell cannabis to customers if they have alluded to the fact they’ll be doing something illegal.

“You’re putting the onus on individuals for safe and responsible cannabis use,” Easley said.

“Whenever you have something on one side (of a border) that you don’t have on the other, people are going to come. I love border locations for capturing new markets.”

Both Illinois and Missouri residents who hold MMJ cards can shop in the store. However, Missouri medical cardholders are not permitted to purchase MMJ products at the store but can purchase recreational products on Mondays – and pay adult-use sales tax rates on products.

“IS&P feels it is important to give Missouri medical patients – some with serious health challenges – access to the dispensary on a day that is typically less busy, even though they must be treated as adult-use customers,” Olivastro said.

Jushi Holdings, multistate cannabis, and hemp operator based in Boca Raton, Florida, recently acquired two Illinois medical cannabis dispensaries from Colorado-based The Green Solution, including one in Sauget, across the river from St. Louis.

Jushi President Erich Mauff said the community has proved receptive to the store adding adult-use sales to its offerings.

“They’re really excited for us to be there,” Mauff said. “They’ve been great supporters of us over the last four years and are keen for us to get the adult-use up and running.

“But we can only do that once we can protect the medical patients and have an uninterrupted supply of marijuana.”

Despite its location, just 4½ miles from St. Louis, medical patients from Missouri will not be able to purchase medical marijuana from Beyond/Hello.

As of Feb. 19, 33,490 Missourians were registered as medical marijuana patients even though the state’s first dispensaries aren’t expected to open until late spring or early summer.

“An individual must be an Illinois resident to be registered as a patient,” Mauff said. “There is no medical cannabis reciprocity between the state of Missouri and Illinois.”

When Jushi rebrands its Sauget shop to Beyond/Hello and opens to adult-use customers – people who are 21 with a valid ID – it will sell to Missourians. The store will train budtenders to ensure customers who are not Illinois residents are aware that crossing state lines with marijuana is illegal.

“A priority for the company will be continually emphasizing communication of all compliance requirements,” Mauff said.